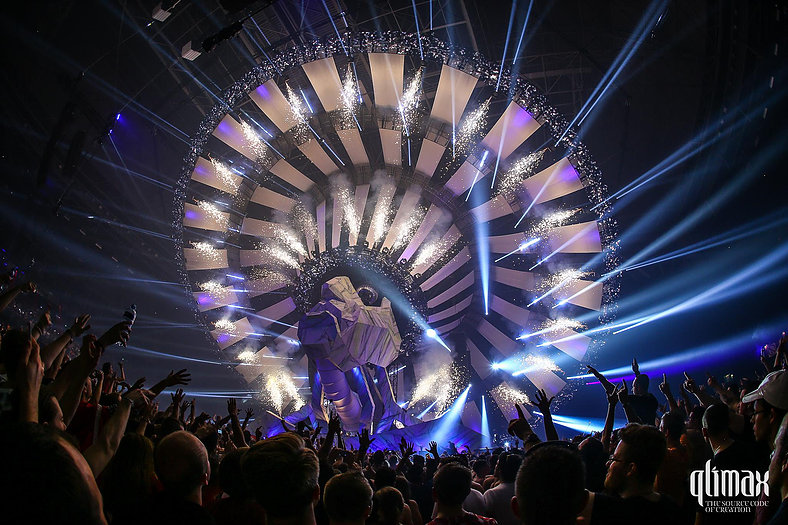 Let’s talk about Qlimax 2015 line-up real fast and overview the artists in case you haven’t heard yet. Keep in mind that this year’s theme is “Equilibrium”.

The first thing that strikes a chord with us, is the lack of MC Ruffian, who is our regular epic narrator for this immersive event. Villain has no lack of experience though, and I’m excited to see his special brand of flair that will help to take us on this epic journey.

We start our journey with Dj Isaac, a man who is no novice to the world of Qlimax, he last played in 2012 and played his first Qlimax in 2002. I’m guessing this set is going to be slower and heavy in reverse bass to warm us up for the night.

Bass Modulators, in comparison to Isaac extremely new on the block and will be playing Qlimax for their first time EVER! The melodic duo pulls us deeper into our journey, setting the tone, setting the mood and launching us into a world unknown.

Atmozfears is coming in with his second Qlimax ever and back to back appearance! This young fellow is perfect for this year’s installment. Predominantly known as a master of Euphoric Hardstyle, he has put out and played out numerous Rawstyle tracks. Atmozfears knows how to turn a party up, get ready primed and ready to IGNITE.

NC will be playing his 6th Qlimax (Creating the anthem in 2014) and Wildstylez his 4th. Both well known for top of the line production and setting the standard for Hardstyle world wide these two are a force to be reckoned with. These two are classic Hardstyle artists, and veteran DJs.

This next set’s going to be unique to say the least. A B2B of Brennan Heart and Ran-D. On one hand, Brennan who is known for creating tracks with syncopating sing along vocals. On the other Ran-D who has progressively been going to the darker side of the genre. Equilibrium.

Here we go, Italy meets the Netherlands in this clash of two titans. Zatox and Dj Adaro. The distortion is going up here, the sound is going to get Raw and the party is climbing into full effect.   I look at this as the top  of the roller coaster, the part right before we get launched into all the twists, turns and drops that make the ride exhilarating!… I’m most excited to watch this go off..if you couldn’t tell.

Frequencerz is seeing their first journey into the world of Qimax and at this point of the show you need to expect them to bring up the BPM, raise Db and level the crowd. I see their first appearance at Qlimax as a welcoming into a group of the most Elite in the scene! Welcome home boys! Bring the pain.

Deetox, Deetox, Deetox. Another newcomer to the stage of Qlimax, but not a newbie to the scene whatsoever. She’s played some of the biggest parties around the world and this set is long overdue! This set is going to be #FATAL.

What better way to close the night, than with a legend in the Hardcore scene. Bring the energy, get ready to lose your mind to, Tha Playah! It’s not a proper Qlimax unless everyone leaves the event with their blood pumping faster than an F-16 slicing through the sky. Another new comer to Qlimax but not to the scene Tha Playah has traveled the world bringing the good word of Hardcore to the populace. A true Master of Hardcore.