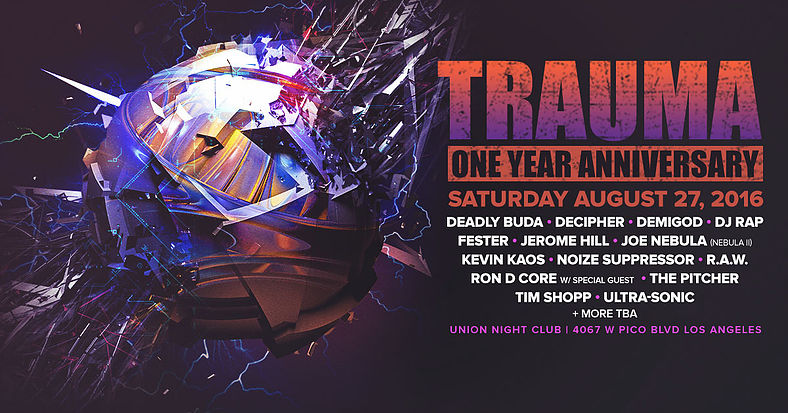 Exactly a year ago, TR-99 launched Trauma: Old School for the Headstrong as a 16-year reunion event for old school ravers. The event hosted two rooms featuring Classic Hardcore in one and Classic Rave music such as UK Hardcore in the other. There were projectors with Pac-Man and old school rave games to keep the theme prevalent.

Watch the trailer for Trauma’s Old School for the Headstrong here:

After the positive response, Trauma Live launched a Harder Styles tour that had stops across the US for fans of Hard Dance.Trauma gave the modern rave scene in the States a taste of old school customs along with Live performances from huge Dutch Hardcore idols such as Rotterdam Terror Corps and Partyraiser, Frenchcore guru Dr. Peacock, Rawstyle deity Digital Punk and the renown Hard Dance host MC Ruffian.

On the 27th of this month, Trauma Live returns with a one-year anniversary for the gig launch! This event will be hosted in LA with international artists such as Kevin Kaos, Noize Suppressor and The Pitcher! We haven’t had Noize Suppressor in our midst for quite a while and it will be phenomenal to watch him perform in the States again!

Local support for the show include Rod D Core (who is also bringing a special guest),Deadly Buda, and Tim Shopp flying in from the East Coast! Ron D Core, one of the fathers of the Hardcore rave scene in the US, has played huge events like EDC and owns Atomic Hardcore Records. DJ Deadly Buda, also one of the respected Hardcore fathers in the scene, contributes as a writer for The Hard Data magazine promoting the music he represents.

Tim Shopp just got back from playing at Innercore Festival – Dr. Peacock’s birthday bash, and will have made his debut appearance in Arizona for SDK Event’s Phobia in August! The “More TBA” tag suggests we could be in for more surprises! There are several additional remarkable artists listed on the lineup making this one-year anniversary for Trauma an absolute must for Hard Dance enthusiasts!